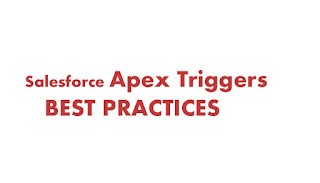 
4) Always Avoid SOQL Queries and DML statements inside FOR Loops
Since apex is running under Multitenent architecture it stricly enforces some time limits. if we use soql inside for loop, that may causes to hit governor Limits.


If we write  SOQL query inside for loop that iterates across all object records. Soql query will be executed for each record. An individual Apex request works 100 SOQL queries before exceeding that governor limit. So if the trigger is invoked by a batch of more than 100 records, the governor limit will throw a runtime exception.


5) Using Collections, Streamlining Queries, and Efficient For Loops to avoid governors.
It is important to use Apex Collections(LIST, SET,MAP)  to efficiently query data and store the data in memory.


6)Avoid to Query Large Data Sets
The total number of records that can be returned by SOQL queries in a request is 50,000. If returning a large set of queries causes you to exceed your heap limit, then Use SOQL  with proper filter conditions(Where conditions) , to avoid 50001 limit error.

7) Use @future Appropriately
@Future is used to run processes in a separate thread, at a later time when system resources become available. @Future have Future methods that will runs asynchronously.

8) Avoid Hardcoding IDs
Don't hard code IDs into queries or apex code. Rather query on some other data to retrieve the desired rows.
Motivation for Advice
Record IDs can change - for example between a sandbox and a production environment. If code is not written properly, this will result in faulty code.